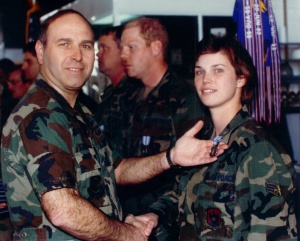 My opinions are my own. They are a result of many environmental factors and natural laws. People who know me well will say that I am apolitical. I currently hold no allegiances to parties or factions. It is a label of some sorts, I am proud to be an American. I love people and places within and without its geological and geo political boarders. My experience as a woman, a veteran, a taxpayer, a parent, and a citizen who has had ZERO representation by any public official elected, appointed, or purchased into office is not unique. Nor is my strong objection to any self-righteous, fear mongering, or victimized approach to governing disguised as leadership.

As a person who tries to be a credible source for anyone interested in what I have to say about a wide range of topics, I have three words for a YouTube video posted by a friend of mine who asked if the candidate was serious. JUST SAY NO. For if we are truly, […..endowed by our creator with certain unalienable rights, and among these are Life, Liberty and the pursuit of Happiness. — That to secure these rights, governments are instituted among men, (not necessarily male gender thanks to the invention of amendments) deriving their just powers from the consent of the governed, — That whenever any form of government becomes destructive of these ends, it is the Right of the People to alter or to abolish it, and to institute new government, laying its foundation on such principles and organizing its powers in such form, as to them shall seem most likely to affect their Safety and Happiness. Prudence, indeed, will dictate that governments long-established should not be changed for light and transient causes…….] and if this is all true, then it seems to me that the same old party lines no longer serve us as a people. If the choices placed before us are the best we can do, it is cause for alarm indeed.

Editor and writer. Interested in tiny things, nineties nostalgia, old jungle mixtapes, my little homestead, and my cats. Not to be fed after midnight.

Lover of math. Bad at drawing.